Well, that was a lot.  Perhaps the most emotional episode so far for me at least if you can believe it. I was left feeling very conflicted after episode 5 and now after episode 6 I feel emotionally drained, but also somehow seen.  This is by far my favorite episode, as far as Im concerned (minus the death of Nathan Freeman of course. We weren’t friends but I feel for him and his family with this a lot) this is the good part of my story anyway.

I’ll start by sharing a quote Jeff Berwick said in the beginning of the episode that I really liked, because of the truth embedded within it. “We started out wanting to fight the government but we ended up fighting ourselves.” Ain’t that the fucking truth for basically everyone involved.

This episode gave the most insight into what my life on that mountain and in that relationship was actually like. It also gave a beautiful glimpse into the first year or so after the murder.  Both of these things made me feel seen. One quote from me that stood out was first me quoting John/Shane “You gotta know what you’re willing to die for” which I followed up with “He had it all wrong, you need to figure out what’s worth living for.” And in many ways that encapsulates life as I tried to rebuilt mine into something better and happier for me.

For the few months after the murder and before meeting Cabra Cuerno, I thought a lot about what I wanted my life to be like. I saw animals, a safe home space and a partner in which I could share a peaceful dynamic with.

In this episode my love, known as Cabra Cuerno to all of you was finally introduced with our story of meeting which is nothing short of magical.  I think I somewhat expected him to be introduced in the last episode before this one but I’ll say that it shows how things started off for us very well. It was very much the beautiful restart to my life that I very much needed at my time.  Having seen the whole series it somewhat makes sense him not being shown sooner as they tried to make it as chronological as possible.

Now I’d be lying if I said that the stuff from my past hasn’t come to haunt us both here and there. In fact it has more often than I would have really liked, as certain things most of them I haven’t even shared here about my old relationship and probably won’t, came to the surface.

What it all boils down is Cabra simply can’t understand how one treats someone else they love in the ways in which I was treated (and lets face it, allowed myself to be treated) within that relationship.  He can have a harsh exterior especially online but the reality is, Cabra is an extremely gentle hearted man with me.  Im sure he’s also had to contend with the fact that I, the woman he loves deeply, allowed myself to be in that bad situation with me for so long. That is more or less my cross to bear but it defiantly has weighed heavily on his heart.

I can understand his feelings, as well as my own on the subject. It’s been a difficult process to say the least.  It is more or less my hope that with the end of the series, we can start to fully move on from the situation that was that relationship.  It makes me both sad and angry to see how much that situation from the past has and still in some ways does impact my current life. Time will tell.  After this post, I intend to shift the content of the blog back towards what it was originally intended for which was to share my current adventures as they happen. I also plan to blog hopefully about the process of fixing my legal situation.

Cabra, Bernardo, whatever you want to be called in this case I just want to say thank you for showing me the difference.  The reality is my life now is very much what I’d hoped for.  I have a loving partner, a fulfilling and peaceful home life with 3 beautiful pets (one of which is shown in the show, is Renegade not the cutest?). I work with my best friends at Anarchapulco and for a few other businesses and companies that I love. I’ve more or less managed to remove all toxic and needlessly stressful interactions from my life.  I also have a circus family that absolutely does not know about this series yet, and Im somewhat hoping they don’t find out because it might make them all see me differently. Maybe that’s in my head.

Seeing and remembering the process of getting my dreadlocks brushed out was nostalgic.  That took daily work for literally 6 weeks of my life as I worked to remove those dreadlocks one by one.  They were filled with sand, dirt, my old dogs hair and more. It was a lot. And I’m glad I did it. Also seeing how Nana, Cabra and Doug’s wife Sol (although they didn’t show her gorgeous face sadly) helping me with it was symbolic to the people who love me most helping me shed some of the dirtier parts of my past.  It’s now been a few years dreadlock free and I am happy to have my hair back.

Moving on to my Dad coming to Acapulco.  That right there was the highlight of my whole 2020 year, which was admittedly intense as the world shut down and I honestly struggled a lot financially before starting to work for Anarchapulco in December 2020.  He got to see Mexico through my eyes and meet all the people who were keeping me going at that time.  He showed up not understanding how I made my life work and left with complete understanding and much of his fear removed for my personal safety.  He got to meet Cabra, which if Im being honest is the only boyfriend of mine that I’ve met that he’s ever admitted to liking. Not shown was when we dropped him at the airport and he hugged Cabra and said “Thank you for loving my daughter.”

It was amazing to show my Dad my favorite things about the city, to have him see me give what was my first Anarchapulco speech ever. Im sure many ancaps following the show will be upset with me for tarnishing the idealistic dream of living in anarchy but what I said holds true.  This life is not for most people. I’m tired of pretending it is.  There is in fact great cost to trying to live truly free in an unfree world.

On Mexico.  Despite the imperfections of Mexico, I will say that I am happier here than anywhere else, especially now. I want to point out that in my life I have known 4 people close to me to be murdered.  3 of those people were in Ohio, including my little brother in spring 2021, which is still “unsolved” legally speaking even though several of my family members know why and how he was killed.  They’ve gone to the police, who have basically ignored their claims despite the fact that the man who killed my little brother is nothing short of a psychopath, with many victims in his path.

I want to be clear that safety, in itself, is an illusion.  I didn’t come here for safety.  I came here to be able to live a better life, and in the end a better life is what I got.  I have a strong relationship, a happy home full of things I’ve worked for.  I spend my days working, doing circus arts, making art in painting crochet and more and spending my time with my loved ones, which these days are mainly Cabra, my pets and family when they do come to visit. I am no longer cut off from those I care about.  In fact the current biggest issue in my life is those lingering legal issues.

I’m working on a plan to remove those legal issues, but even when I do the plan is to leave Mexico quietly for a passport, and to return legally with a visa, to start the process of temporary and eventually permanent residency, maybe even citizenship.  I’m not interested in living in limbo anymore, so if there are any lawyers reading this, Mexican or from the US, hook me up guys.

I want to touch briefly on the passing of Nathan Freeman.  I don’t have good memories with the Freemans, this much is true. But I feel for the kids especially in this situation.  I know what its like to have a parent give up and turn to substances. I know what its like to wish they had just quit as they promised.  Seeing Meta say “I wish he’d fucking quit, why didn’t he quit like he said he would” hit home.  I’ve been there with the loss of my own Mom who had her own substance abuse issues.

And finally, I want to talk about Anarchapulco.  Anarchapulco has become even more near and dear to my heart in these last 2 years specifically.  It almost didn’t happen in 2021, when the reigns were passed over to my best friend and sister from another mister, Catherine Bonandin. Jeff literally told her in December 2020 to get started and she managed to completely redesign and rebuild that event with the help of myself and Macey Tomlin.

We worked the three of us plus a few others in what we have lovingly called the dream team to rebuild the event in a way in which its never existed before. The goal was to get back to basics but we ended up building something more beautiful than I think any of us expected.  Macey has since left the team to focus on her work with plant medicine, which in a way feels very right.  Cat and I along with the much bigger team we’ve built together continue to work tirelessly to help the event evolve into something we are all really proud of.

Anarchapulco has not only survived but managed to get once again to a point of thriving and perhaps maybe beyond, as it lacks the dramatic flair it used to have every year.  Now the majority of people that go are highly inspired and excited by what they find there.  This coming year is perhaps the one I am most excited for because we will incorporate the ideas of Anarchaforko and build something new with them for the second week of Anarchapulco, called Agoraforko.  For those wondering, Anarchaforko (and its name) died with that original event.

Anyway, I do intend to blog about the planning of Agoraforko here too.  So stay tuned for that. 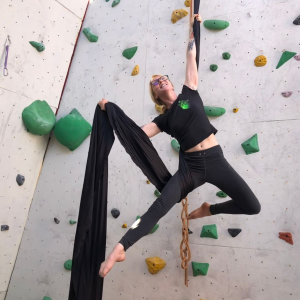